Tagalog is a script of the Philippines. It was formerly used to write the Tagalog, Bisaya, Ilocano, and other languages. The Tagalog language now utilizes the Latin script. The Tagalog script is distantly related to the southern Indian scripts, but the exact route by which they were brought to the Philippines is not certain. It seems that they may have been transported by way of the palaeographic scripts of Western Java between the 10th and 14th centuries. Written accounts of the Tagalog script by Spanish missionaries, and documents in Tagalog, are known from the period of initial Spanish incursion (mid-1500s). The Tagalog script had fallen out of normal use by the mid-1700s. It has three living descendants: the Hanunóo, Buhid (also called Mangyan), and Tagbanwa (also called Bisaya) scripts, also part of this proposal.

Vowel signs are used in a manner similar to that employed by other Brahmic scripts. The vowel I is written with a mark above, and the vowel U with an identical mark below, the associated consonant. The mark is known as kudlit or tulbok in Buhid and ulitan in Tagbanwa. The script has only the two vowel signs I and U, which are also used respectively to stand for the vowels E and O. Though all languages normally written with the Tagalog script have syllables possessing final consonants, they cannot normally be expressed in this script. Reforms to express final consonants with a virama character were proposed for the Tagalog script, but were rejected by native users, who considered the script adequate without it. A similar reform for the Hanunóo script seems to have been better received. These signs were not proposed for all of the scripts; because they are found in existing character sets (by Hector Santos), they are encoded here for Tagalog and Hanunóo. The HANUNOO PAMUDPOD has been used by the Hanunóo themselves; the inclusion of the Tagalog permits, at least, the representation of the texts proposing its

addition (documents of historical interest) in UCS encoding. Other reforms, such as the addition of E and O vowel signs or the letter FA, have not been included here as they are wanting attestation (even in existing character sets). There is room in the tables for their later addition should it prove necessary.

The Philippine scripts are read from left to right in horizontal lines running from top to bottom. They may be written either in that manner, or in vertical lines running from bottom to top, moving from left to right. In the latter case, the letters are written sideways so they may be read horizontally. This method of writing is probably due to the medium and writing implements used. Text is often scratched with a sharp instrument onto beaten strips of bamboo which are held pointing away from the body and worked from the proximal to distal ends, from left to right.

II, ed. 1947. Doctrina christiana: the first book printed in the Philippines, Manila 1593. A facsimile of the copy in the Lessing J. Rosenwald Collection. Washington, DC: Library of Congress.
Sample from Wolf 1947:85

Sample from Santos 1994, illustrating a page from Francisco Lopez’ 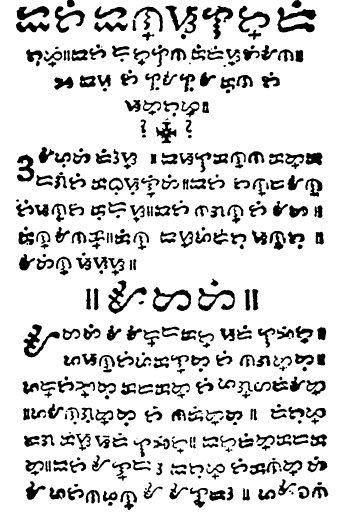 Proposal to encode Philippine scripts in the UCS

Sample from Santos 1995. On the left, Hanunóo; on the right, Buhid, showing the consonants in combination with vowel signs, including special logotypes in the with the vowel signs 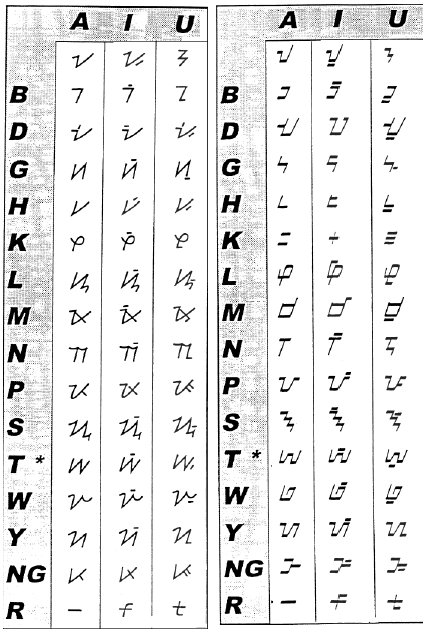 The following is the actual Unicode proposal 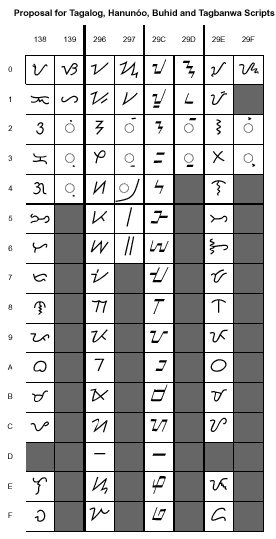